The Law: A Nuisance

We can't obey international law because it conflicts with maintaining a "favorable investment climate" for business and a favorable racial environment for Israel. We can't obey financial laws because plundering Wall Street firms are "too big to fail." We can't obey state and local laws seeking to restrict employment and residency to those legally authorized to enjoy those privileges, because business wants to drown the New Deal social contract in illegal labor that can't command decent wages and benefits the way legal workers can.

So what laws can we obey?
Posted by Michael Smith at 11:18 AM No comments: Links to this post

The US Federal Reserve kept monetary policy frozen after its June meeting as it acknowledged that the economy has run into a soft patch.

It will get hard as soon as the viagra, cialis and levitra presidential campaign money kicks in.
Posted by frank scott at 6:56 PM 2 comments: Links to this post

“Back during slavery there were two kinds of Negros. There was that old house Negro and the field Negro. And the house Negro always looked out for his master. When the field Negros got too much out of line, he held them in check. He put them back on the plantation.”
Malcolm X
America seemed to achieve a great victory when Obama was elected president, both overcoming its wretched racist history and sending a positive message to humanity. But if Malcolm were alive he might point out that an African-American running the plantation for his masters does not change anything but the skin tone of the person serving those masters.
Accepting such cosmetic change when our “plantation” needs radical transformation may be too costly a price to bear.
Our economy inflicts greater loss on the majority while a minority sees its profits rising. Public service is under vicious assault as corporate capital, private wealth and foreign interest – Israel’s often placed far above our own – attempt to reinforce the crumbling structure of minority wealth by weakening the foundation under everything else. And presiding over this imperial plantation is a 21st century model of Malcolm’s house Negro, keeping the global field hands in line.
Often a verbal fumbler when thinking on his feet, Obama’s ability to “give good speech” makes many react to him with uncritical praise. Some of his detractors call him a socialist, a Muslim or an alien, depending on the depths of their stupidity or racism. But his employment seems assured given the dreadful opposition offered by corporate capital’s other ruling party, though there has been growing criticism from former supporters as conditions move from bad to worse.
While too many Americans accept hyphenated national identity, the president’s Kenyan father makes him truly African-American. But millions born here and wearing that label are more deeply rooted in the USA than most other Americans. They should not tolerate being reduced to a divided and conquered minority, and at this point in history neither should the rest of us. We ought to reject outdated and imposed divisions that diminish our mental capacity into permanent subservience to ruling power. That social malady finds us supporting a “white” house occupant as agent of the majority while he maintains a system that profits a minority at our expense.
The symbol of democracy at the top is no different from finance capital’s congressional servants who, like puppets on strings, applauded the Israeli president when he addressed what might as well have been his Knesset. Their excitement was for AIPAC campaign contributions which assure maintenance of a racial supremacist state that threatens our future and would vanish without our financial and military support.
Our government - with rare exceptions - serves financial masters who buy it in election sales that are sham performances of democracy. It is employed by an oligarchy laughing all the way to the bank it stocks with our money which it then loans to us at exorbitant interest rates. That’s part of the perpetual economic scam of a system that always enriches an idle minority by robbing the working majority.
We should all be “ people of color ” turning beet red in shame at having been repeatedly manipulated and swindled in the interest of these masters. They use outside menace and inside divisional diversity to set people against one another as their profiteering shreds the social and environmental fabric to leave us naked against the elements of harsh reality. That reality cannot be tolerated any longer, here or in the rest of the world.
Libya, a nation long critical of western domination and the “house” Arab regimes which support it, is being destroyed under the guise of freeing it from a despot. Sound familiar? The atrocity of Iraq, Afghanistan and Pakistan threatens to last longer than all 20th century wars combined. Iran continues to be fanatically demonized and European capital is attacking its people with undisguised fury. As trillions are spent on death and destruction that brings more misery and terrorism, an imperial world leader rhetorically offering positive change is negatively furthering the status quo of war, nuclear power and the wealth of his masters.
Many of the minority living in the symbolic master house at the top of the economic pyramid are doing lavishly well. The rest of us are the overwhelming majority that lives in an environment under growing and race threatening assault. Democratic control needs to be taken by the power of the people in that field of humanity. House servants of capital, no matter what ethnic, racial or sexual hyphenation they wave like a flag, are working for their wealthy masters and against democratic interests.
The sooner we drop divisional nonsense that says the skin tone, sex or beliefs of people makes them somehow different humans, the sooner we will begin solving our problems. Minority masters have put those ideas in our heads and their house servants reinforce their propaganda. We need to cure ourselves of a mental illness that assures physical failure for civilization. Peaceful prosperity cannot be achieved under the present distribution of humanity’s wealth, which goes primarily to a minority at everyone else’s expense. This government serves that minority. The workers in the symbolic field need to “get out of line” in Malcolm’s words, reject servants of their masters and take that house of government for their own. The changes that would bring about will impact far beyond the symbolic nature of a speechmaker for the housemasters and extend to being a change maker for the USA and beyond.
Posted by frank scott at 12:25 PM 1 comment: Links to this post

By MICHAEL BARBARO and ASHLEY PARKER 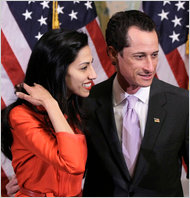 By KATHARINE Q. SEELYE
12:02 p.m. | Updated Former Senator Rick Santorum made it official on Monday, announcing first to ABC News and then to a crowd at the courthouse in Somerset, Pa., that he would join the field seeking the Republican nomination for president.
Posted by frank scott at 12:30 PM No comments: Links to this post