Before the USA begins vengefully bombing another nation, with Iran, Syria and North Korea high on the list of supposedly deserving targets, we should look at our own nest of potential terrorist murderers right here at home. Anyone, mentally ill or not, who wished to inflict horror on large numbers of people could do so at greater ease than it would take to acquire professional help for a disabling condition or find a friend understanding enough to listen to someone’s problems. We are the most alienated, armed and dangerous population in the world and a person moving from guns to explosives as an expression of hate, distrust, anger or any other socially warped form of pain management really wouldn’t have that difficult a time. It may even be relatively easier to graduate from pistols to bombs given that there are at least some anti-gun forces at work - however unsuccessfully so far - while the anti-explosives movement does not yet exist.

Though it is as possible as anything seems to be in a rapidly spiraling into anything-can-happen-to-anyone-anytime environment, the tragic Boston bombings need hardly be a foreign exercised plot given that even a barely competent US insecurity state should have known about it if that were the case. At its previously incompetent state it failed miserably on 9/11/01 but since then has had ample time to not only clean up its act but also become one of the world’s biggest eavesdroppers on and invaders of its own people’s privacy. Hard to believe a foreign entity could arrange with or set up people here to do something like this with no knowledge coming to a security industry which is close to listening in on every thought that takes the form of electronic blips on line, voices on phones or texts in print. Unless it was the most sophisticated secret organization on the planet or the multi billion dollar insecurity marketplace has produced a greater fiasco than the banking scam that cost americans more billions, the “noise” made by the planning of such a plot would have to be heard, even by an incompetent and hearing disabled crew of counterspies. A more likely very small if not individually driven killer operation sounds more logically illogical.

The ability to create or purchase and then place bombs in a crowded area is unfortunately widely shared and really not that much more difficult than spraying automatic gunfire at moviegoers in a theater or children and teachers at school. Though frightening enough to make us all think even before this specific tragedy, it needs to be considered a possible action at any time by anyone driven to suicidal acts that take countless others with them. As this is written, this one doesn’t seem the act of a consciously suicidal person or persons, though thinking that one could survive this and get away with it implies at least some form of delusional mental state. But any idea that a foreign nation was behind this attack should be further back on the burner than many war mongers and other drooling-for-blood advocates of mass murder would like us to believe. And the number lusting for a vampire feast of life sucking is probably larger than it was at the time of 911, given the state of public mentality after all these years of attacks on consciousness by military-industrial-media, the Washington staff of the warhead department, and lobbies constantly protecting Israel from biblically originating fear of obliteration and/or extermination as a result of being chosen by god for special status as scapegoat for everybody else on the planet. All of these forces and sources have worked hard and spent much to create more hostility in an already delicately trip wired environment. But before we go along with the program of public mass murder committed on innocent nations to avenge more private acts of brutal violence, we would do well to more closely examine the atmosphere and mindset of a society – ours – that might play a major role in creating these tragedies.
Posted by frank scott at 9:08 PM 7 comments:

WoW! Aren't You Glad We Elected This Guy?

you want bold, intellectual leadership, or what?

Obama: 'We will find out who did this and we will hold them accountable.'


In a statement at the White House in response to the deadly blasts at the Boston Marathon, President Obama promised that "we will find out who did this and we will hold them accountable." Obama declined to call the event a terrorist attack, saying, "We don’t yet have all the answers. We still do not know who did this or why." He said he had already ordered increased security around the United States, and promised that the federal government was "mobilizing the appropriate resources to investigate and respond."
Posted by frank scott at 3:57 PM 8 comments:

Miracles of the Market: Social Insecurity


During the twentieth century near collapse of capitalism - the Great Depression - relatively enlightened forces of wealth initiated programs to prevent total breakdown and possible revolution. Among these was the origin in America of what already existed in Europe: a proposal to help elders from entering the poorhouse when they were no longer able to work. Known as “social security” it became one of the most popular of the New Deal programs of the FDR administration.

These programs all helped free market capitalism survive by humanizing its most obvious forms of economic savagery and placing the expense for what was called social democracy on the great body of taxpayers, with slight tax increases for the richest americans who could easily afford them. Only the most slack-jawed reactionaries opposed these policies but even some critics grudgingly accepted that older people dropping dead in the streets wouldn’t look good and might even cost private insurers far more than would make it a profitable investment for venture capital of the day. That support from the past has been fading in the present as everything that tried to humanize capitalism is under attack in a revival of fundamentalist free market policies. Worse, the supposed representative of the common people, a corporate hype called the Democratic Party, has a leader even more gutless than the usual occupant of subsidized housing at 1600 Pennsylvania Avenue. This purveyor of twisted tongue speeches that sound good until analysis reveals their hollow rhetoric and whose practice amounts to no material substance has turned against that program. As in all present assaults on capitalism’s really anti-social safety net, he professes to improve the program by cutting it, the way a hospital life support system is improved by cutting off the air supply of the patient.

Not only does the social security system have none of the problems alleged by panic mongering billionaires and their political and media servants, it would remain solvent for generations if the tax system were adjusted to become progressive instead of harshly regressive. At present, income is taxed only up to 113 thousand dollars, which means a person making 226 thousand pays half the rate of someone earning that figure, and far less than someone earning only ten thousand. Billionaires and their servant millionaires pay a rate infuriatingly lower than that paid by laborers, service workers, and almost all of the professional class. If we simply removed the cap and taxed all income, the social security system would be safe and secure beyond its present condition, which even its most dishonest critics admit that even if unchanged will not threaten anyone for many years. In fact, the system will run a surplus for many years, as it has in the past, with those excess funds invested in government paper that makes the economy look slightly better than its actual condition. So why are all these nervous nellies, now led by the most dishonest nelly of them all in the half-white house, proclaiming the need to cut these benefits?

Supposedly because the national debt is so high that steps must be taken to cut government expenditures before Armageddon is at hand, or profits vanish for the 1% we are totally dependent on for our life, liberty and pursuit of happiness, whichever fable sounds more acceptable depending on the gullibility of the listener.

Among the many things left out of the scare story being peddled by the rich and their servants: the national debt has jumped recently because of the taxpayer bailout of the very banks whose practices brought on the 21st century Great Recession. It’s not a depression, yet, we’re told, and in fact we’re supposedly coming out of it by slashing the public sector to benefit our economic private parts in the masturbatory practice that passes for free market capitalism. That multi billion dollar gift from the taxpayers wasn’t enough. Now we are supposed to give up every minimal service that once saved capitalism and now makes some angry that they ever allowed their peasants to become – even if only in advertising jargon and principles of unpaid debt - a middle class. If the rich are overfed and the poor are starving, those who eat one meal a day are in the middle. Feel better?
Posted by frank scott at 11:38 AM 3 comments:

Can You Believe This? Sure You Can...

he's only been gone for 13 years so he must know exactly what's happening, especially with"activists"  reporting inflated death toll numbers which havent reached six million yet but wait until that copyright ends and we'll see... 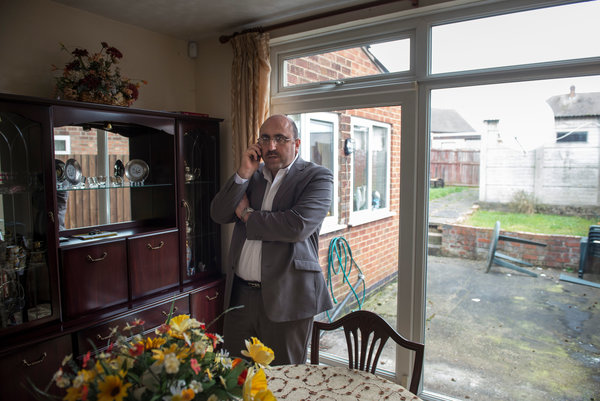 Andrew Testa for The New York Times
"I am a simple citizen from a simple family who has managed to accomplish something huge  using simple means." Rami Abdul Rahman, the founder of the Syrian Observatory for Human Rights

COVENTRY, England — Military analysts in Washington follow its body counts of Syrian and rebel soldiers to gauge the course of the war. The United Nations and human rights organizations scour its descriptions of civilian killings for evidence in possible war crimes trials. Major news organizations, including this one, cite its casualty figures.

Yet, despite its central role in the savage civil war, the grandly named Syrian Observatory for Human Rights is virtually a one-man band. Its founder, Rami Abdul Rahman, 42, who fled Syria 13 years ago, operates out of a semidetached red-brick house on an ordinary residential street in this drab industrial city.
Using the simplest, cheapest Internet technology available, Mr. Abdul Rahman spends virtually every waking minute tracking the war in Syria, disseminating bursts of information about the fighting and the death toll. What began as sporadic, rudimentary e-mails about protests early in the uprising has swelled into a torrent of statistics and details.
All sides in the conflict accuse him of bias, and even he acknowledges that the truth can be elusive on Syria’s tangled and bitter battlefields. That, he says, is what prompts him to keep a tight leash on his operation.
“I need to control everything myself,” said Mr. Abdul Rahman, a bald, bearish, affable man. “I am a simple citizen from a simple family who has managed to accomplish something huge using simple means — all because I really believe in what I am doing.”
He does not work alone. Four men inside Syria help to report and collate information from more than 230 activists on the ground, a network rooted in Mr. Abdul Rahman’s youth, when he organized clandestine political protests.
Posted by frank scott at 7:38 PM 6 comments:


Obama to Unveil Initiative to Map the Human Brain

By JOHN MARKOFF and JAMES GORMAN

President Obama on Tuesday will announce a research initiative, starting with $100 million in 2014, to invent and refine new technologies to understand the human brain.
Posted by frank scott at 1:14 PM 7 comments: