Can You Believe This? Sure You Can...

he's only been gone for 13 years so he must know exactly what's happening, especially with"activists"  reporting inflated death toll numbers which havent reached six million yet but wait until that copyright ends and we'll see... 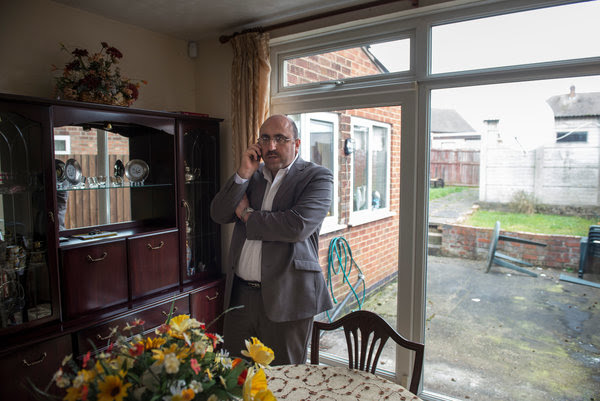 Andrew Testa for The New York Times
"I am a simple citizen from a simple family who has managed to accomplish something huge  using simple means." Rami Abdul Rahman, the founder of the Syrian Observatory for Human Rights

COVENTRY, England — Military analysts in Washington follow its body counts of Syrian and rebel soldiers to gauge the course of the war. The United Nations and human rights organizations scour its descriptions of civilian killings for evidence in possible war crimes trials. Major news organizations, including this one, cite its casualty figures.

Yet, despite its central role in the savage civil war, the grandly named Syrian Observatory for Human Rights is virtually a one-man band. Its founder, Rami Abdul Rahman, 42, who fled Syria 13 years ago, operates out of a semidetached red-brick house on an ordinary residential street in this drab industrial city.
Using the simplest, cheapest Internet technology available, Mr. Abdul Rahman spends virtually every waking minute tracking the war in Syria, disseminating bursts of information about the fighting and the death toll. What began as sporadic, rudimentary e-mails about protests early in the uprising has swelled into a torrent of statistics and details.
All sides in the conflict accuse him of bias, and even he acknowledges that the truth can be elusive on Syria’s tangled and bitter battlefields. That, he says, is what prompts him to keep a tight leash on his operation.
“I need to control everything myself,” said Mr. Abdul Rahman, a bald, bearish, affable man. “I am a simple citizen from a simple family who has managed to accomplish something huge using simple means — all because I really believe in what I am doing.”
He does not work alone. Four men inside Syria help to report and collate information from more than 230 activists on the ground, a network rooted in Mr. Abdul Rahman’s youth, when he organized clandestine political protests.
Posted by frank scott at 7:38 PM

My developer is trying to persuade me to move to .

net from PHP. I have always disliked the idea because of the costs.

But he's tryiong none the less. I've been using WordPress on numerous websites for
about a year and am anxious about switching to
another platform. I have heard great things about blogengine.
net. Is there a way I can import all my wordpress posts into it?
Any kind of help would be really appreciated!

Undeniably imagine that which you stated. Your favorite
justification seemed to be on the net the easiest thing
to take into account of. I say to you, I certainly get irked at the same time as people think about worries that
they plainly do not recognise about. You controlled to hit the nail upon the
top and also defined out the entire thing with no need side-effects , other folks can take a signal.
Will likely be back to get more. Thanks

It's really a great and helpful piece of information. I am glad that you simply shared this helpful information with us. Please keep us informed like this. Thanks for sharing.