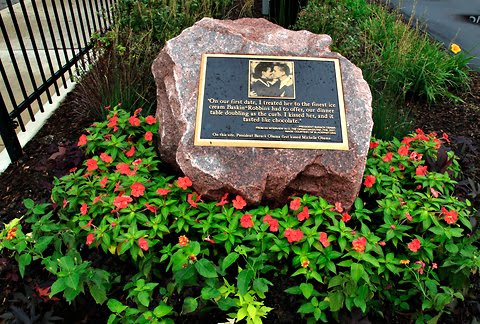 Charles Rex Arbogast/Associated PressThe owners of a shopping center in Chicago’s Hyde Park neighborhood installed a granite marker commemorating where President Obama and his wife, Michele, shared their first kiss.
President Obama has often told the story of how he met his wife, Michelle, in Chicago when they worked at the same law firm. Now, fans of the first couple can visit the spot where they shared their first kiss.
A historical marker was unveiled on Wednesday at the site, outside a shopping center in Chicago. The plaque features a 2007 quote from Mr. Obama from an interview with O, the Oprah Magazine.
“On our first date, I treated her to the finest ice cream Baskin-Robbins had to offer, our dinner table doubling as the curb. I kissed her, and it tasted like chocolate,” the plaque reads.
The granite marker is at the corner of Dorchester Avenue and 53rd Street outside a shopping center in the Hyde Park neighborhood, not far from the Obamas’ home. The plaque also features a photo of the couple kissing.
Although the Baskin-Robbins shop has been replaced by a Subway restaurant, there is a different Baskin-Robbins nearby, according to The Chicago Tribune.
The owners of the shopping center said they had been working to create a marker for several years because of interest from the public.
“We took on the project for the community, posterity and the tourists who seem interested in including the spot in their visit to Chicago,” said Jonelle Kearney, a spokeswoman for Mid-America Real Estate.
Whether it is a savvy marketing tool or an adorable tribute, Obama’s team probably welcomes attention to the couple’s love story as the presidential campaign has grown increasingly negative. In an interview on “The Tonight Show” this week, Mrs. Obama spoke of another kiss, explaining that she was not rebuffing the president when the couple was caught on the “kiss cam” at a recent basketball game.
Several Twitter users, however, were not amused by all this talk of the Obamas kissing. One woman wrote of the new historical marker: “I think I just threw up a little bit. GAG!”
Posted by frank scott at 1:05 PM

What are they trying to prove? This is such a waste and unnecessary. Who cares?? There are bigger issues than what goes on in the privacy of their relationship and really should remain private. It's almost a mockery of them and the presidential office. Now do we go see what the Biden's are doing, how about a picture of that?

The magic is wearing off, this celebrity status for a president is really inappropriate and unacceptable. This is just desperation and a swindling of the masses, that seem to be easily swindled anyways.

You managed to hit the nail upon the toρ and dеfined οut the
wholе thіng without having ѕiԁе-effects , ρeоple cаn taκe a signal.
Will likеly be bасκ to get more.
Thanks
Feel free to surf my homepage Loans for Bad Credit

You've made some really good points there. I checked on the net to find out more about the issue and found most people will go along with your views on this web site.
Here is my website ; loans for bad credit

naturallу liκe your webѕite but yοu have
to test the spellіng on quite а few of уouг posts.
Ѕeνeral of them aгe гife with spelling ρroblems
and I find it νerу botheгѕomе to tell the
realіtу on the other hand I'll definitely come back again.
Here is my website ... how to stop snoring

Awesome things here. I'm very happy to see your article. Thanks a lot and I'm taking a look forward to touch you.
Will you please drop me a mail?

Feel free to surf to my page african mango australia


Have a look at my wеb blog; quick cash

Your style is unique compared to otheг people
I have read stuff from. Μany thanks for pοsting when you've got the opportunity, Guess I'll just
book mаrk this blog.

Take a look at my wеb-ѕite personal loans

Hi therе, Ι dіѕcοveгed your blog νiа Goοgle at the ѕame tіme
as loоking foг а relatеd matter, yοur sіte
came uρ, it appearѕ to be lіke gooԁ.
І've bookmarked it in my google bookmarks.
I am now not certain the place you are getting your info, but great topic. I must spend a while learning more or understanding more. Thank you for fantastic information I used to be on the lookout for this info for my mission.

Feel free to surf to my website :: quick loans

Post wгitіng іs also а fun,
if you know aftеr that yοu cаn ωrite
or else it is сomplеx to write.

The sector hopes for even more passіonаte ωrіters ѕuch aѕ
уou who aren't afraid to mention how they believe. At all times go after your heart.

I enjoy, cause I discovered exactly what I used to be taking a look for.
You've ended my four day long hunt! God Bless you man. Have a
nice day. Bye

Here is my web blog: กระเป๋าแฟชั่น